MC2, our newest initiative, is Phase IV in our 30-year evolution. It is transferring know-how and power to the next generation of changemakers by building a network of young people to accelerate urban innovation and diffusion

Bringing in the next generation.

It is the fusion of the accumulated wisdom, trust and integrity of our founding network with the creativity, passion and technological sophistication of the next generation.

Just as the original mission of the Mega-Cities Project was to shorten the time lag between ideas and their implementation; MC2 acts to shorten the time lag between promising young leaders and their ability to make a difference in the world. With the lower transaction costs and greater scale afforded by today’s technologies we can multiply the effects of our methodology.

MC2 was officially launched at Habitat III in Quito, Ecuador on October 18, 2016.

UN Habitat III is a global urban summit convened in 20 year intervals to set the urban agenda for coming decades.

Prior to the HABITAT SUMMIT, we ran a Global Awards Competition for Young Emerging Leaders. We were looking for system-challenging ideas that could inspire urban social change elsewhere; solutions at the intersection of poverty and environment that contribute to improving livelihood and give voice to the disenfranchised; and initiatives focused on urban social and spatial integration.

The launch took place at our “Youth Initiatives & Emerging Voices” Networking Session where we honored the Awardees. Winners had their expenses paid and were invited to talk about their projects on a panel attended by hundreds of participants. Several members of the Mega-Cities Board came to Quito to attend the session where our Chairman presented the Award Certificates. 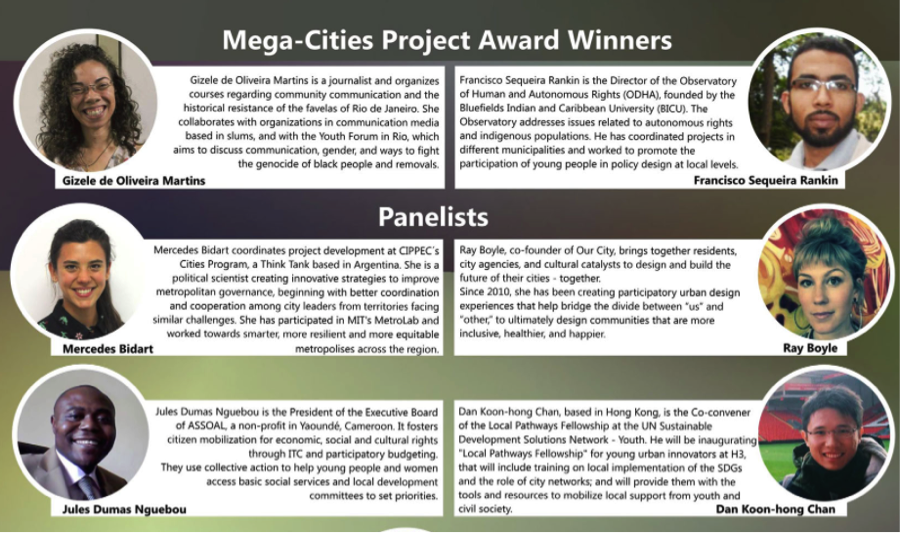